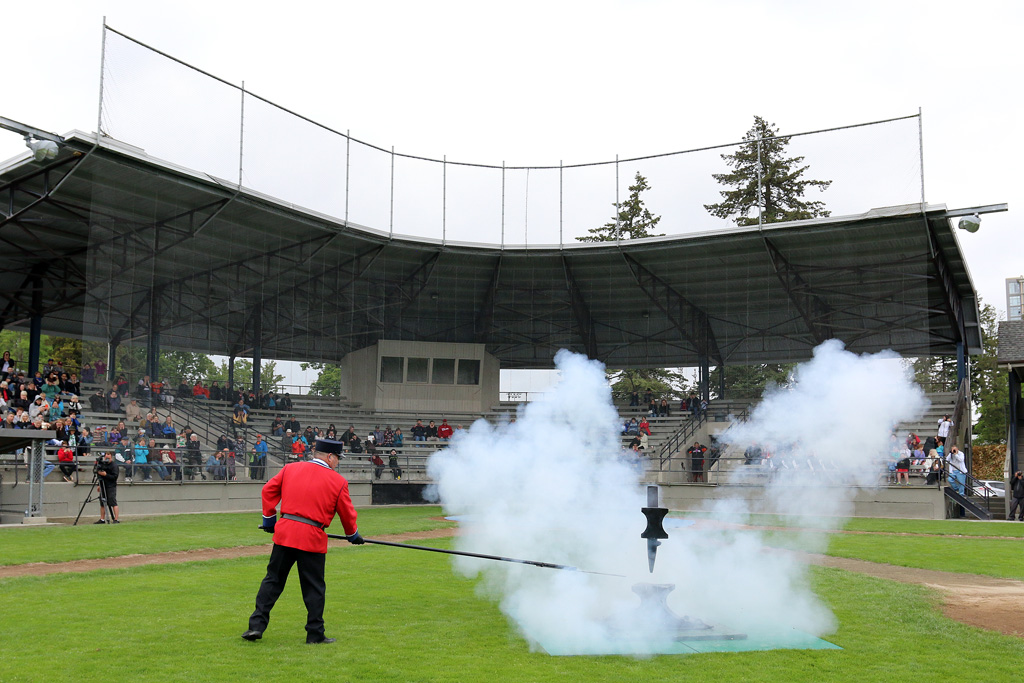 This photo essay was published originally on Tenth to the Fraser

Photos and story by Mario Bartel

The first time I was assigned to cover the Hyack Anvil Battery’s annual Victoria Day salute to the Queen, I heeded all the precautions from my photo colleagues; wear earplugs and keep my mouth open to help dissipate the concussion from the gunpowder blast. And prepare for the cacophony of car alarms from around the neighbourhood that answers every concussion.

The event itself perplexed and captivated me.

Any time people gather to blow things up, there’s the potential for great photos. Dress in bright red historical costumes, repeat the explosions 21 times and, well, that’s a good day for any photographer.

Over 25 Victoria Days at the NewsLeader, I missed only a handful of anvil salutes; usually when the spring holiday coincided with my own vacation.

The anvil salute is the perfect New Westminster tradition; steadfastly rooted in the city’s history, quirky in a modern context. Its origin was an improvised solution by the city’s fire brigade when a cannon wasn’t available for the annual salute to be fired on Queen Victoria’s birthday. One of the members, a former Royal Engineer, recalled seeing gunpowder placed between two anvils to create a cannon-type concussion.

Blacksmith Thomas Ovens, who would go on to become Mayor, donated a pair of anvils and members of the brigade set to work experimenting with the amount of gunpowder needed to create the desired explosions without blowing off anyone’s head or hands. The ceremony has endured ever since.

And while attendance in the grandstand at Queen’s Park Stadium waxes and wanes according to the weather, witnessing the anvil salute has become a kind of rite of passage for new residents to the city; every year when emcee Archie Miller asks how many people are seeing the ceremony for the first time, about half the hands go up.

I may no longer be employed by the local media, but it somehow feels wrong to walk away from the tradition of the anvil salute. There’s familiarity in seeing the same old faces of the Anvil Battery, a twinge of sadness when one of those faces is no longer there. There’s comfort in the event’s rhythm and Miller’s annual history lesson. And when the first blast ignites, its concussion punching my chest, I still feel the thrill of being a part of something uniquely New West. 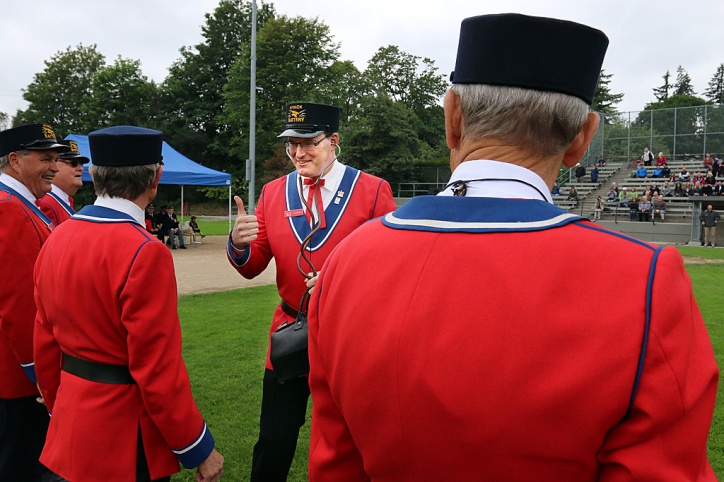 “Medical officer” Jerry Dobrovolny gives a thumbs up as he checks whether each member of the Hyack Anvil Battery made it through the 21-anvil salute. Photo by Mario Bartel 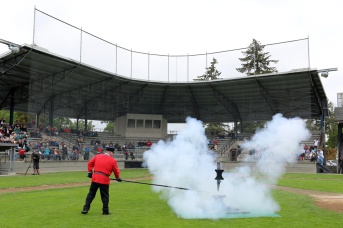 The anvil salute to the Queen on Victoria Day is also the launch of New Westminster’s annual week-long Hyack Festival. 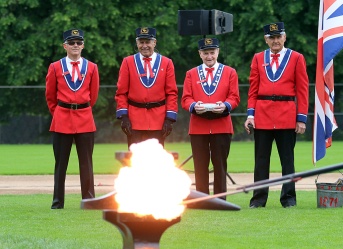 Members of the Battery look on as the first of 21 shots is ignited by sparking gunpowder between two heavy iron anvils. The unique ceremony originated in the 1870s when the Hyack Fire Company didn’t have a cannon available to fire a salute to Queen Victoria on her birthday. One of the members, a former Royal Engineer, recalled once seeing gunpowder and the anvils being used to create a blast. Photo by Mario Bartel 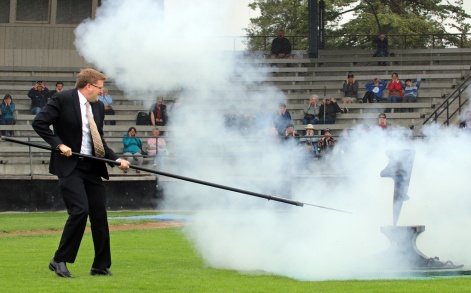 New Westminster Mayor Jonathan Coté flinches as he gets his turn to fire the anvil salute. Photo by Mario Bartel 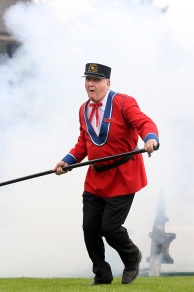 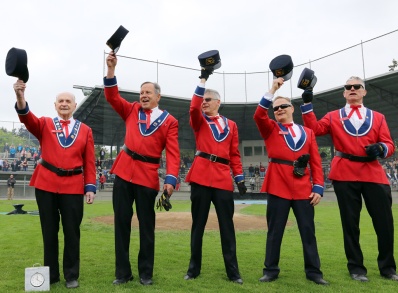 The ceremony concludes with three cheers for the Queen. Photo by Mario Bartel 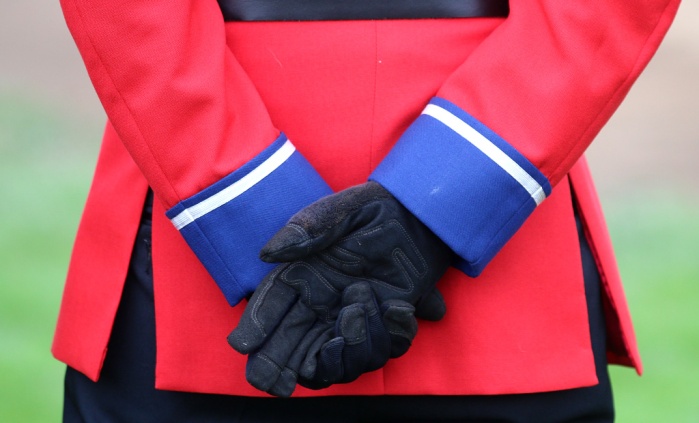 The anvil salute was started by members of New Westminster’s Hyack fire brigade, many of whom had previously served with the Royal Engineers who built the city. Photo by Mario Bartel 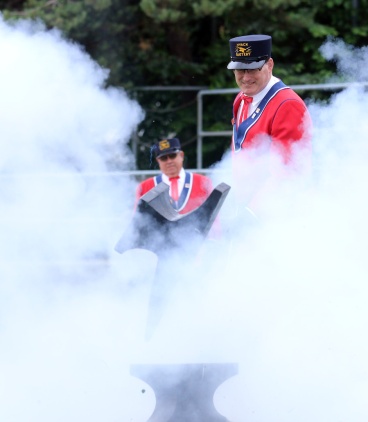 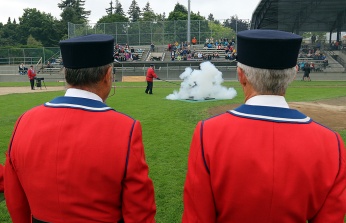 Members of the Hyack Anvil Battery look on during the annual Vcitoria Day 21-gun salute to the Queen at Queen’s Park Stadium. Photo by Mario Bartel 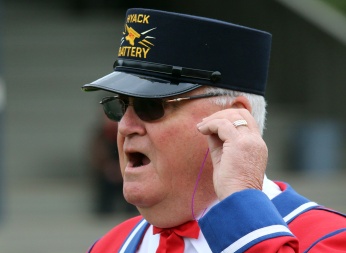 Fred Sparkes calls out for the next shot. Photo by Mario Bartel 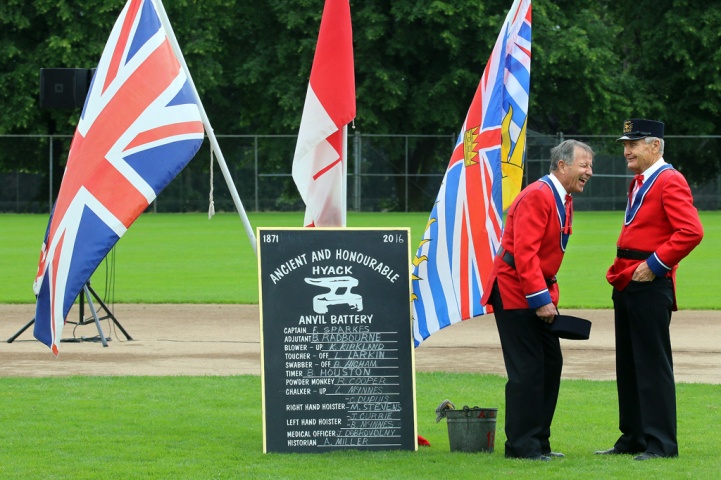 Members of the Hyack Anvil Battery relax prior to the annual renewal of their unique 21-gun salute to the Queen on Victoria Day at Queen’s Park. Rather than firing off a gun 21 times, members of the Battery place gunpowder between two iron anvils, which then is then ignited by a hot poker at the end of a long rod. Photo by Mario Bartel 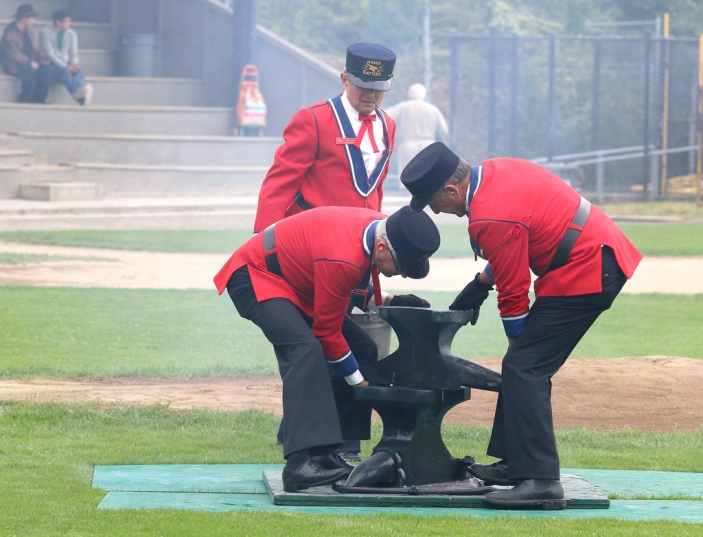 As the smoke still clears from the previous shot, members of the Hyack Anvil Battery set up the anvils for the next one. Photo by Mario Bartel 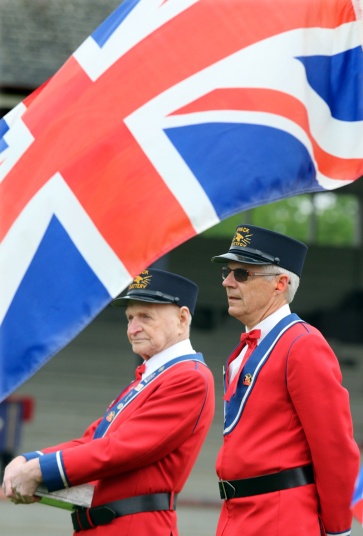 The Hyack anvil salute to the Queen is the only ceremony of its kind in the world. Photo by Mario Bartel