For three years, the FR Fuggitivi has pulled the curtain down on its summer riding season with a climactic, epic ride. We call it the Fondon’t.

It has all the perks of a Fondo – camaraderie, timed intervals, snacks, beer, big mileage – but none of the expense.

The first Fondon’t was the Tour de Huit Ponts.

This year our ride patron took us on some familiar roads but with fresh and fun new twists, not the least of which was a gravel climb that forced more than a few riders to unclip and portage the loose stones and rocks.

Since last year’s smokey ride up Baker, the Fuggitivi has evolved into a proper, official group. We’re registered, we have directors, sponsors and pro kit. We have numbers; 17 riders took the start although one quickly abandoned because of a recurred leg injury.

Of course, big numbers bring bigger aspirations; we can no longer just slap the Fondon’t label on a long year-end ride and call it an epic day. Sunday, the epic bar reached a new level.

The day started with a national anthem singer and only got better.

It included three fast and flowing descents, one of which had never been ridden by most of the FRF, two sprint and four tough King of the Mountain competitions marked by signs, a lunch stop with reservations, a close encounter with a family of deer and even a champagne surprise.

It also included one total tire blowout, a couple of flats, and a shower of rain.

Most cyclists know what to expect on a long ride. It’s the unexpected that can turn a familiar route into an epic day out.

Climbing 800 metres of loose gravel at 11 per cent can challenge even the most seasoned roadie.

An epic day out deserves an epic reward; champagne secreted away in a farmer’s field along the road.

The reward is even sweeter at the top of a difficult climb. 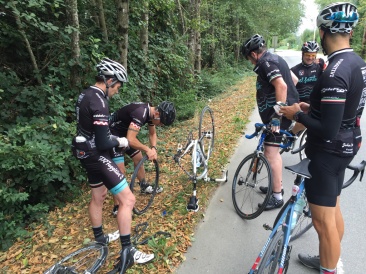 A long ride doesn’t achieve epic lore without a few mechanical challenges along the way.

No this isn’t the south of France in July; it’s Pitt Meadows in August.

To the King, or Queen, of the Mountain go the rewards. 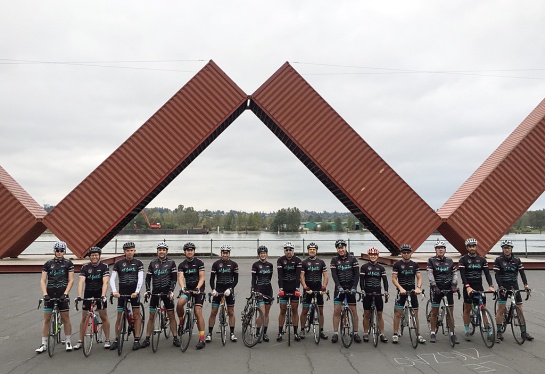 The FR Fuggitivi has grown to a proper peloton as the group prepares to ride its third annual Fondon’t.

Familiar countryside takes on a new colour when riding amidst the peloton.

The Fondon’t has all the trappings of a Fondo, including an anthem singer, but none of the expense.
August 30, 2016 by mariobartel Categories: UncategorizedTags: blogger, communicator, cyclist, Mario Bartel storyteller newspaper journalist, photographer multimedia Leave a comment 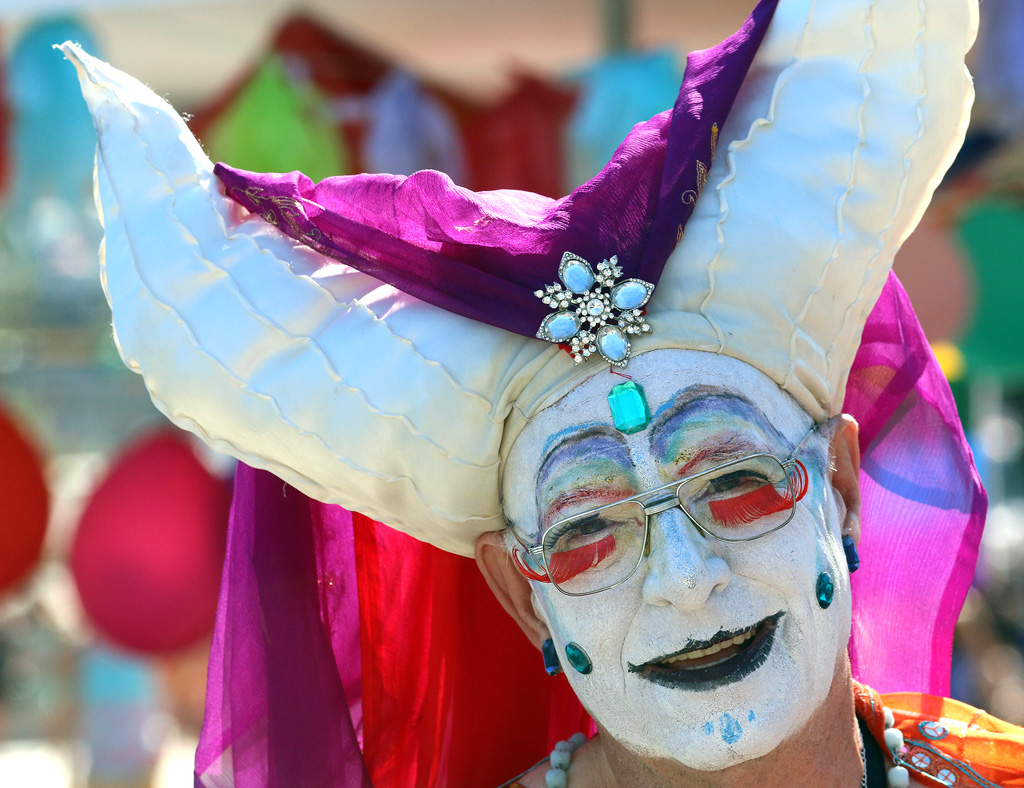 New Westminster was under the rainbow on Saturday.

The third annual Pride Street Party took over Columbia Street to celebrate diversity in the community and beyond. 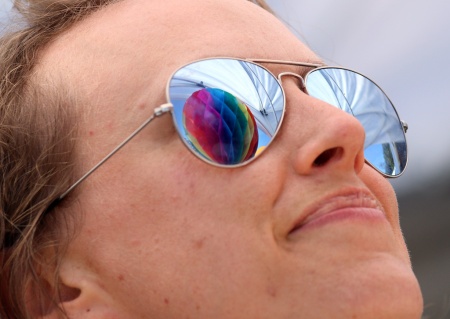 PHOTO BY MARIO BARTEL A rainbow decoration is reflected in the sunglasses of Vanessa Galt at Saturday’s Pride street party on Columbia Street.

PHOTO BY MARIO BARTEL A pole dancer from AVA Fitness gets some height at Saturday’s Pride street party.

PHOTO BY MARIO BARTEL Umbrellas were a necessary accessory in the beer garden at Saturday’s Pride street party on Columbia Street. 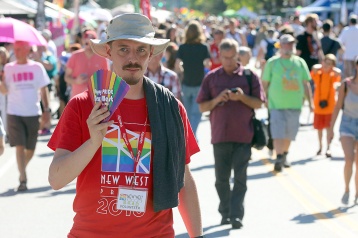 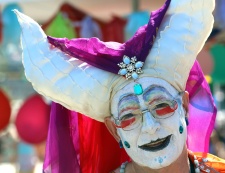 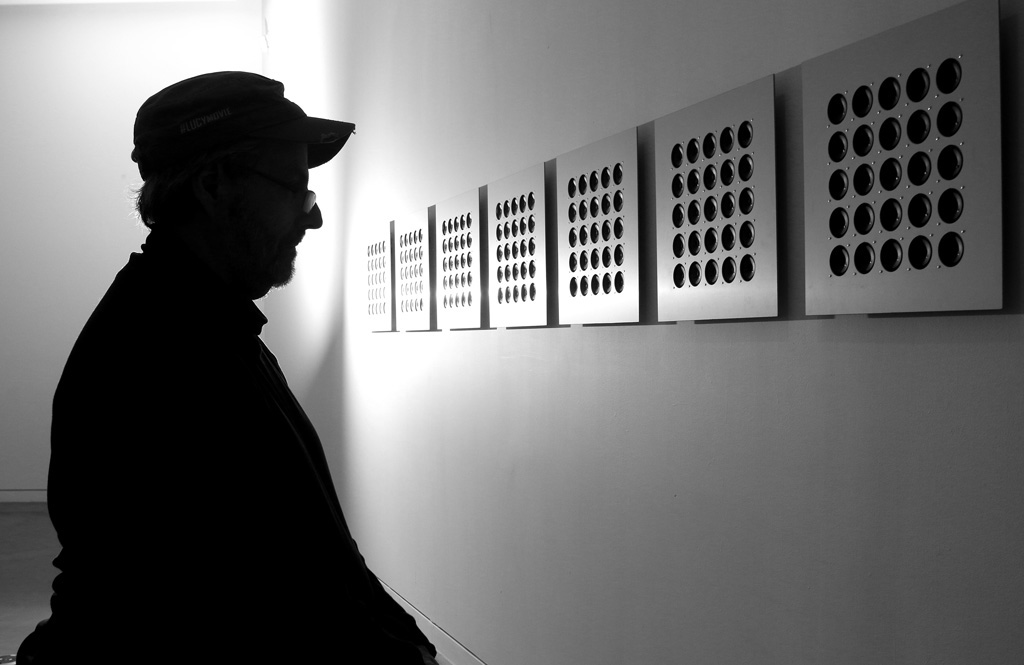 In March I spent a couple of hours with art lover Jim Johnston as he visited OTIC, an aural installation that explores the nature of sound at New Westminster’s innovative New Media Gallery. I shot these photos to accompany an article in Tenth to the Fraser magazine.

Jim Johnston doesn’t look like a patron of the arts. He wears a sweatshirt, baggy pants and a faded and frayed ball cap. A shopping bag is his constant companion.

For years Johnston ran a produce stand at the old Public Market at New Westminster Quay. He currently works at a comic book store.

Every day he makes a point of stopping in to the New Media Gallery at the Anvil Centre to absorb and ponder the latest exhibit. Sometimes he just stays for 15 minutes. Some days he lingers for hours.

But every visit “you feel better for being in here,” he says. “Just to see this, to see something, to be transported.”

Photo by Mario Bartel New Media Gallery regular Jim Johnston is always prepared to talk about his ideas and reaction to the installations. 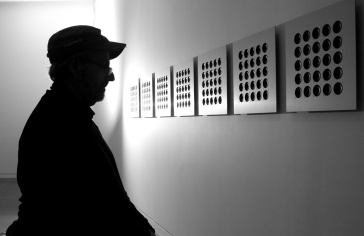 Photo by Mario Bartel Jim Johnston, a regular visitor to the New Media Gallery at the Anvil Centre, pauses to listen to the sounds emitting from tiny speakers in Tristan Perich’s installation, Octave.

Photo by Mario Bartel Jim Johnston takes in The Cenre of Silence from his favourite position.

Photo by Mario Bartel Jim Johnston is enveloped by soft sound in Jesper Norda’s installation The Centre of Silence, one of four pieces that comprised OTIC at the New Media Gallery in the Anvil Centre. Johnston has become a regular visitor to the gallery. 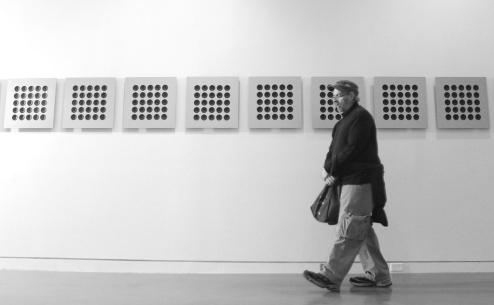 Photo by Mario Bartel Jim Johnston takes in Tristan Perich’s Octave by walking along the panels of tiny speakers that emit sound. 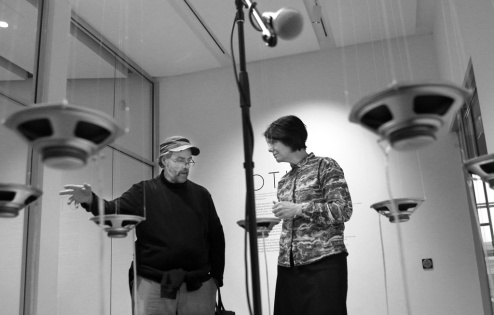 The following is adapted from a piece I wrote in 2014 for the NewsLeader’s annual issue of best photographs from the previous year. It was an issue I looked forward to producing as every page was devoted to showcasing my work. It was also an opportunity to reflect on the role images play in telling the community’s stories.

When I came out of journalism school, I was determined to tell stories with a camera.

I’d gone into journalism school four years earlier because my high school teachers said I could write; working for a newspaper seemed a pretty good way to get paid regularly to write.

But during the course of my education I decided I wanted to make the camera my storytelling tool of choice.

Photographers seemed like the cool guys in the newsroom, with their expensive cameras and lenses, the mysterious darkroom where they disappeared at the end of every shift, then reappeared hours later with stacks of fantastic images as if by magic.

Photographers can’t sit in the office and reconstruct events by making phone calls.

Photographers don’t get to hang out in the warmth of press boxes or work rooms. They have to be on the sidelines, lens pressed to the glass at the hockey arena, down in front at the political event.

Of course that also means photographers have to endure the rain and cold, jostle for space with other photographers and TV camera operators, have to dodge careening football players.

Photographers climb things or crawl under them to get the best angle. They get dirty. Sometimes they even put themselves in peril; early in my career a photo call to shoot a preview for an upcoming air show ended when the vintage plane from which I was shooting crash landed in a field short of the runway after its engine quit.

But at the end of those sometimes harrowing days, you feel like you’ve been a part of the news; you’ve lived it in a small way, rather than just observed it. And hopefully the photos you took convey part of that experience to readers.

Digital technology has changed the way photojournalists work and thinned the numbers who still get to do this work. It’s changed the perception of the work they do.

But one thing hasn’t changed. Photographers still can’t take pictures from a desk, over the phone. They have to be there.

For a portfolio of some of my favourite storytelling images in New Westminster and Burnaby, click here.