It’s good to have goals; even better to achieve them.

For the past 12 years, my July’s have been defined by my goal to ride 1,000 kilometres in the month.

But otherwise, it’s been pretty achievable.

Especially as I tend to take two weeks off to get up early to watch the Tour de France then, suitably inspired, spend the rest of the day riding my own bike.

The demise of my newspaper meant I’d seen the last of my six weeks’ annual vacation that I’d toiled 20 years to attain. In fact, the beginning of a new job meant no vacation at all.

But two unexpected gift rides last week, and a favourable calendar with a long weekend to close the month, opened the door to the possibility of reaching that 1,000. Good legs, recovered from the gruelling Triple Crown, put me over the top.

Saluting the goat, any the achievement of my annual July riding goal.

Saturday’s bonus ride was into a strong headwind. 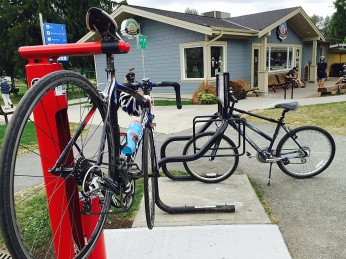 A handy bit of cycling infrastructure at Port Moody’s Rocky Point Park; a bike repair stand with tools and an excellent air pump. Not that there was anything wrong with Lapierre.

Beware the dismay of a Fuggitivi denied his first Lunch Doctor experience!

Of course in the Strava universe, 1,000 km in a month is but a molehill. The month’s distance champion was a woman from Florida, who clocked more than 11,000 km! That means she rode more than 370 km a day, 12 hours of every day of the month!

My legs wilt just at the thought.

As does my brain. Because she did her rides covering laps of the same 20 km circuit, over and over and over again. I can only imagine the mental fatigue and boredom of watching the same countryside roll past hour after hour, day after day, week after week.

Her Strava profile says she has a goal to set a new record for ultra marathon cycling. To achieve that, she’ll have to ride more than 122,432 km by next July 1. Because this was the first month of her challenge.

When Princess of Pavement asked me two days running, “aren’t you going for a ride?” the nature of her enquiry and the way she asked it implied encouragement.

I hadn’t planned to ride.

On Sunday I was scheduled to work on a special project so I was resigned to missing the weekly FRF ride. Instead I went for a solo roll on Friday. When I reminded PofP after her ride query Saturday night, she suggested I could head out early, before I had to work.

Living in an open loft presents challenges for any early or late activities. There’s no door to close to muffle the noise. And while Little Ring has a separate room with a doorway, his senses seem to roust at first light and await any cue that the day is set to begin, especially if that cue indicates breakfast is being prepared.

So an early-morning ride requires meticulous preparation the night before. That means placing the bike by the door, hanging kit in the bathroom for changing, placing shoes, helmet, gloves and emergency kit somewhere clear of creaking floor boards, honing muscle memory to avoid those noisy floor boards, putting out breakfast utensils and dishes to minimize drawer and cupboard opening, rounding up breakfast ingredients to limit the number of times the fridge has to be opened and closed.

The pressure is enormous. One false step, one moment’s inattention could disturb the pre-dawn silence.

The unexpected evening ride, however, usually comes with a peace dividend. It seems Little Ring is more amenable to sticking to his bedtime script when there’s only one of us around; it’s as if he has an innate sense there’s no “good cop” around who will accede to his various nighttime stalling games just to keep the peace.

So when Princess of Pavement asked again on Monday whether I was going for a ride, I was gifted another great big mozza ball of free kilometres.

And while they’ll help get me a little closer to my usual July goal of 1,000 kilometres for the month, I’m resigned that I likely won’t attain it this year. Working at a new job and not having my traditional two weeks holiday during the Tour de France to pile on the rides has been the Yoko Ono to my Strava goals. 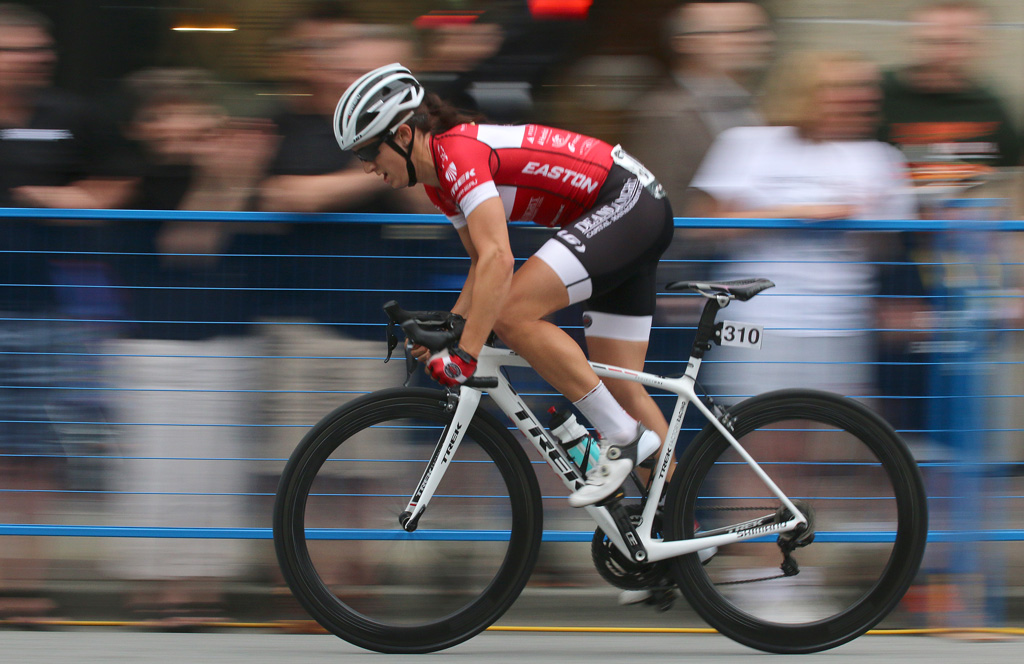 The inaugural Grand Prix is part of BC Superweek, a week-long festival of bike racing in communities around Metro Vancouver that attracts top female and male pro cyclists from across North America and as far away as Australia. In Port Coquitlam, they raced a twisting 1.3 km circuit that circumnavigated the downtown and City Hall.

But the event was more than just a bike race. It was a day-long celebration of cycling with live entertainment, a beer garden, a kids zone, business and cycling expo as well a support races for kids, junior racers, amateurs and corporate teams.

I was hired by the Tri-City News to cover the evening’s feature races as well as capture some of the collateral fun. 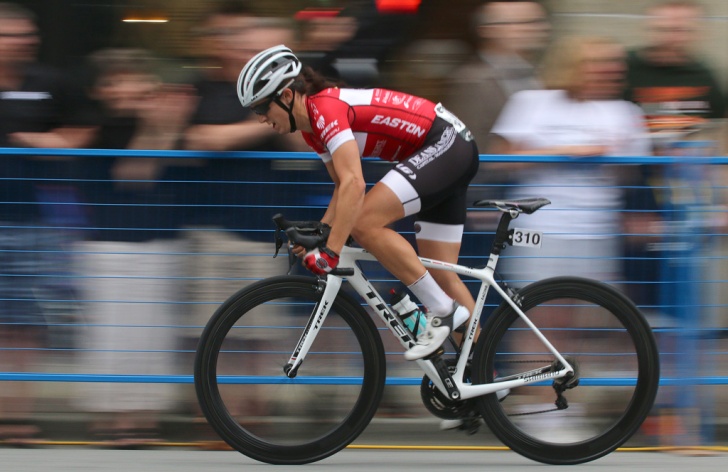 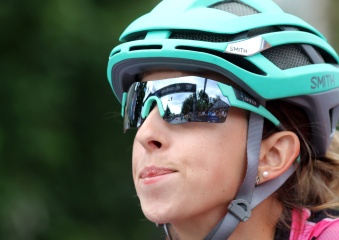 MARIO BARTEL PHOTO A racer reflects on the start of the women’s race at Friday’s PoCo Grand Prix. 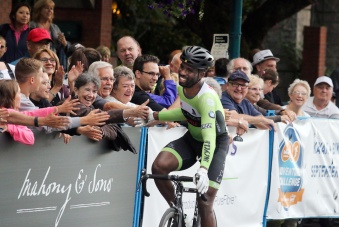 MARIO BARTEL PHOTO The women’s race is underway at Friday’s PoCo Grand Prix, part of the Superweek series of races around Metro Vancouver that attracts top pro riders from around North America and as far away as Australia. 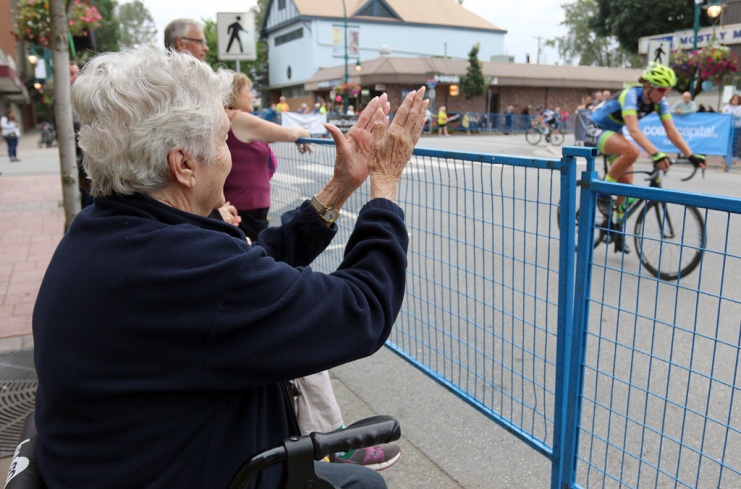 MARIO BARTEL PHOTO A rider’s elaborate nails prior to the start of the women’s race at Friday’s PoCo Grand Prix. 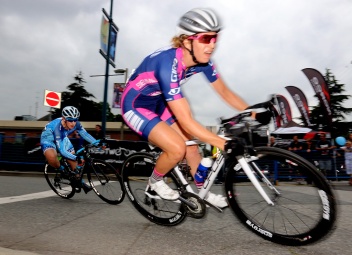 MARIO BARTEL PHOTO Riders speed through the corner of Donald Street and McAllister Avenue during the women’s race at the PoCo Grand Prix on Friday.

MARIO BARTEL PHOTO Heidi Ujfalusi rings the bell to signal a “Prime” lap in which riders race to the finish line to claim a cash prize. 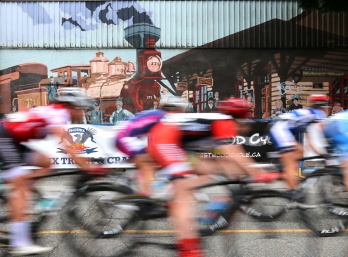 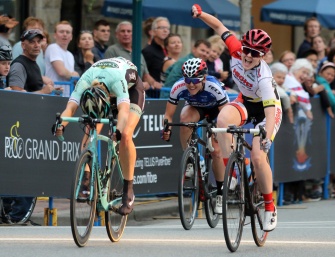 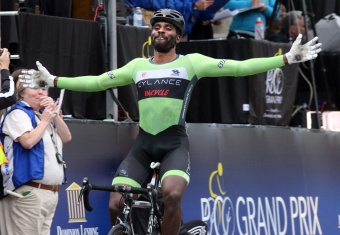 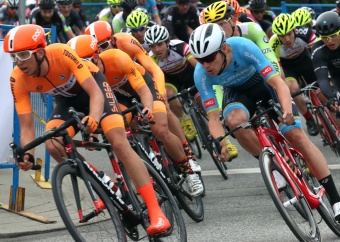 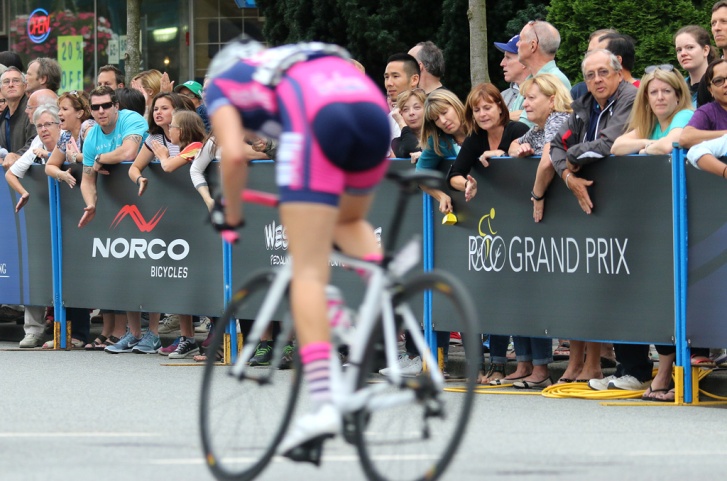 MARIO BARTEL PHOTO Spectators along the barriers on Shaugnessy Street cheer on the riders in the women’s race at Friday’s PoCo Grand Prix.

MARIO BARTEL PHOTO Wheels are lined up for the start of the women’s race at Friday’s PoCo Grand Prix. 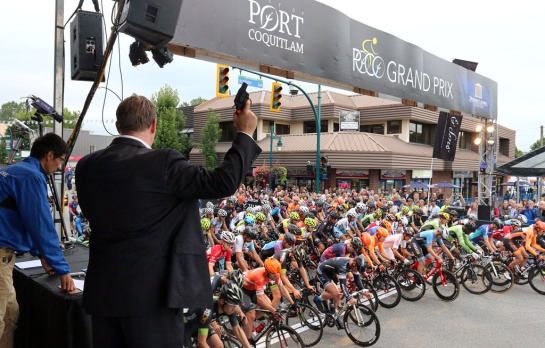 Strava is the measure of my mediocrity.

After every ride, I dutifully download the data from my Garmin GPS to the social site that connects riders from around the world who break down their routes into bite-sized segments. Comparing my performance with previous rides can give me an idea of improvements in my own fitness, as well as affirm the sensations in my legs; feeling strong during a climb up Burnaby Mountain isn’t just in my imagination when Strava awards me a Personal Best trophy icon.

Earning those little trophies is addictive.

Strava has more than 1.5 million active users. They include cyclists and runners. Logging their activities into the site provides real-time tracking of their performance improvements over segments created by fellow users.

Those segments are also the measure upon which cyclists and runners can compare their performance with others, a sort of giant ongoing virtual race.

Sometimes those virtual competitions can get pretty intense. Setting a new KOM can be conversation fodder in the FRF peloton, a throw-down to other riders.

Not that I ever have to worry about setting or regaining a coveted KOM.

In the Strava world I am famously mediocre. My modest achievements are neither great nor terrible. Inevitably a personal best that I worked hard to attain will end up ranked solidly somewhere in the middle of the pack of all riders who’ve ridden the same segment.

Except for descents. Apparently I can be pretty decent at those; I’ve even managed to crack the top 10 on some, even if briefly.

This Saturday I’ve signed on for the Triple Crown, a challenging ride up Vancouver’s three major mountains, Seymour, Grouse and Cypress. I’ve done all three separately, never on the same day. The route covers 75km with around 2000 metres of climbing.

I’m confident I’ll be able to do it. I’m certain I’ll be slow. I’m scared of the effort it’s going to take.

So instead, I’m going to think of it as three fast and fun descents. Because what goes up, has to come down. Before it can go up again…

I may even manage to set a downhill PB or two.

The clouds of doom began gathering as soon as the destination for Sunday’s FRF ride was announced.

As we embarked on our ill-fated adventure into cycling’s Heart of Darkness, Delta, they thickened, became more menacing.

Barely over the Bridge of Lost Souls that transports unwitting victims into her lair, never to be seen again, the trouble began. Mike, an FRF newbie on his inaugural ride, flattened. By the time the day was done, the fierce headwind was no longer the topic of our peloton’s consternation; it was Mike’s unprecedented FOUR flats!

Delta is where cyclists get lost, and tires go to die.

The city’s bike routes are deplorable. Not only is their signage inconsistent and often illogical, the lanes are poorly maintained.

It is July, the thick of riding and bike commuting season, and the bike routes are as dirty with gravel and debris as if it was mid-March after a harsh winter of snowplowing and sanding. the sharp stones bite into tires, ricochet into unsuspecting shins, ping off shiny carbon fibre frames and even catapult off passing vehicles. Riding in Delta, especially along busy routes like River Road, is a dangerous game of waving and weaving through a moonscape disguised as a bike lane.

Making roads and routes safe for cyclists involves more than just painting white stencils on shoulders. Those lanes should be swept regularly to clear them of the debris and detritus strewn by cars and trucks. A sharp stone squeezed out by a tire at 120psi becomes a missile, capable of gashing shins, chipping paint, flattening tires. Just ask Mike, whom we last saw humping his bike back down the Bridge of Lost Souls, his patience and our peloton’s supply of inner tube and CO2 cartridges exhausted.