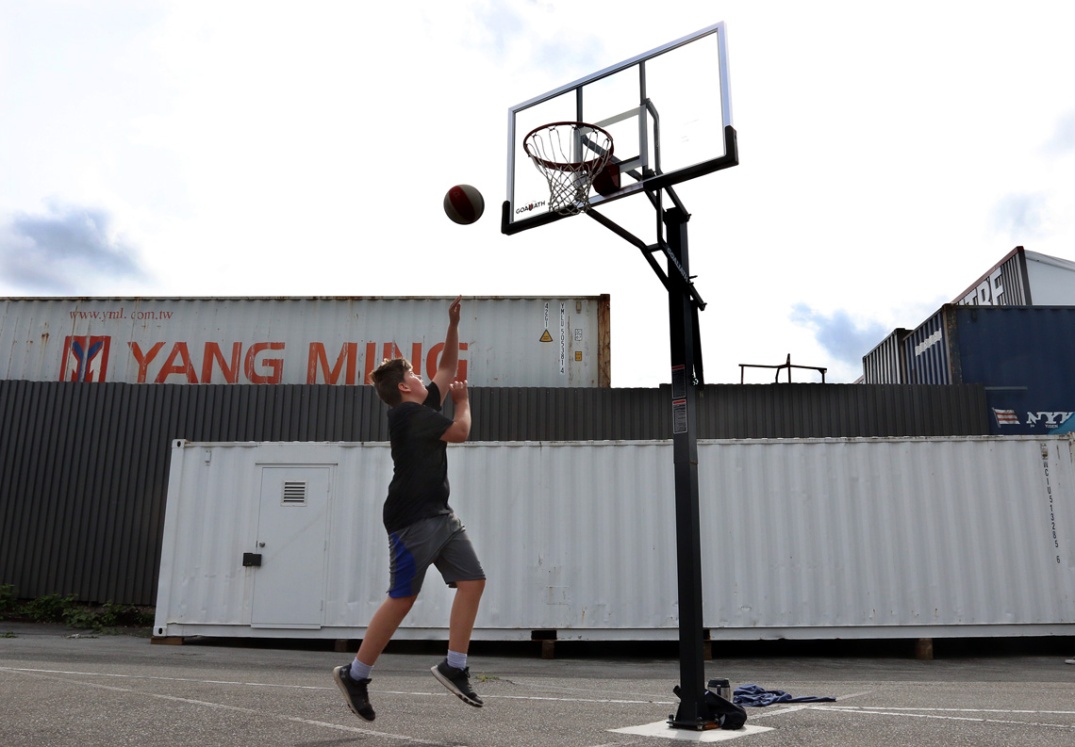 This is part of a series reprising some of the stories I’ve covered for The Tri-City News during the COVID-19 pandemic.

As some summer youth basketball programs struggle to find a way to operate amidst the COVID-19 pandemic, Coquitlam’s Panther Hoops is taking it to the streets — or, more specifically, the parking lot — thanks to the collective effort of some volunteer parents.

Shut out of school gyms and community centres that are mostly still closed, and loathe to overstay its welcome at some outdoor facilities like Port Coquitlam’s Evergreen Park, Panther Hoops’ head coach Doug Dowell said the program needed a more permanent solution to make its plans to put on a full schedule of summer camps viable and sustainable.

“The pressure was on us to find a place we could call our own.”

That’s when several parents decided if they built it, the kids could play.

Over the course of a rainy weekend in June, when pretty much every weekend was damp, they cleaned up detritus from the parking lot behind BC Christian Academy where the program is based, bored deep holes into the pavement, assembled four full-sized basketball nets with glass backboards and poured concrete to lock them in place. A welder was brought in to add another level of security.

The result is an urban playground worthy of a Woody Harrelson streetball movie, set against a backdrop of an auto repair shop, crooked fibreboard fencing and stacks of shipping containers.

MARIO BARTEL/THE TRI-CITY NEWS A player at one of the Panther Hoops basketball camps goes for a layup on makeshift courts prepared by parent volunteers in the back parking lot of BC Christian Academy in Coquitlam.

MARIO BARTEL/THE TRI-CITY NEWS Domenico Petroziello gets set for shot at Panther Hoops basketball camp, which is being held outdoors on a parking lot as most gyms and community centres are still closed because of the COVID-19 pandemic. 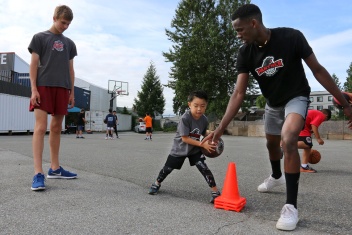 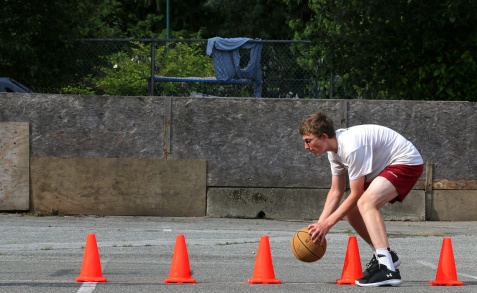 MARIO BARTEL/THE TRI-CITY NEWS Will Patterson works on an agility drill at Panther Hoops basketball camp that is being held on makeshift courts assembled in the back parking lot of BC Christian Academy in Coquitlam.

MARIO BARTEL/THE TRI-CITY NEWS Stacks of shipping containers, and crooked fibreboard fencing are the backdrop for makeshift basketball courts constructed in a parking lot behind BC Christian Academy so Panther Hoops could conduct its summer youth camps. 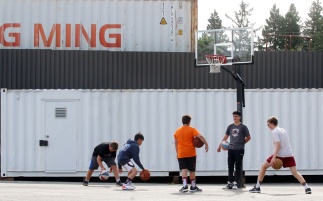 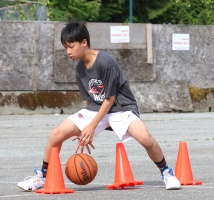 MARIO BARTEL/THE TRI-CITY NEWS A player at Panther Hoops basketball camp dribbles his way around pylons. To keep space between the young athletes, the emphasis is on individual skill development.

MARIO BARTEL/THE TRI-CITY NEWS A crooked fibreboard wall, an overgrown gully and a rusted, broken chainlink fence are the backdrop to one of the outdoor basketball courts installed in a parking lot behind BC Christain Academy in Coquitlam.

Dowell said the camps are an important element of Panther Hoops’ broadened mandate to serve the wider community after it started 13 years ago as a prep program at BC Christian to develop elite players who could contend for post-secondary scholarship opportunities.

The public health emergency threatened to derail that progress.

Dowell said he quickly recognized moving outdoors was the solution.

“With this whole COVID thing, people are on the edge,” he said. “We wanted to get the kids out the door.”

With no gym at BC Christian, Panther Hoops has always led a nomadic existence, so it ventured as far as Pitt Meadows to find open-air facilities it could use for small groups of kids working on their individual skills.

He said the exercise has been refreshing.

“In a way, it’s helped us realign ourselves.”

The end result, Dowell said, is a more innovative, free-form approach to basketball, more akin to creative streetball than the regimented strategies and patterns of the sport when it’s played in the gym and a final score matters.

“It’s made you get more into the ingenuity,” Dowell said. “It’s a missing part of the game.”

The weekly camps, that run through to the end of August, have full safety procedures in place, like a staged entrance to the outdoor facility after each participant has answered a health questionnaire, had their temperature checked as well as recorded, and their hands sanitized. Players must also bring their own ball which can be used only by them exclusively, although it’s also wiped down frequently during sessions and before they head home for the day.

And while the outdoor venue means the odd session may get washed away, the kids don’t lose out, as each is issued a punch card so a missed day can be made up as part of another camp.

Dowell said their summer of survival is actually allowing the program to thrive.

“True growth in the sport will only happen when you think outside the box,” he said.

Or in the case of Panther Hoops, outside the gym.