When the NewsLeader closed two years ago, I thought I was done. Over the course of 31 years in community journalism, I’d told some good stories, met countless interesting people, had opportunities to document some pretty cool events and moments.
After six months of decompressing and riding my bike, I stepped to the “other side,” creating digital content for a local realtor. It was a chance to use my skills in a different venue, bringing value to a new audience.
The gig lasted 11 months.
No sooner had it ended when an opportunity to return to community journalism presented itself. It took all of one day to realize I still had stories to tell, I thrive in the buzz of a newsroom, I crave the variety and the challenge of weaving something from nothing, putting it out to the world and then doing it all over again.
I went in with no illusions about the precariousness of our industry and the security of my gig. Every time we hear of a paper closing or another cutting further, my blood runs a little cold. A phone call from head office and a closed door meeting could send me back to my Plan B in a heartbeat.
But for as long as it lasts, I’m glad to be back doing what I do best, telling stories with my camera and with words, digging out little nuggets from around town that might surprise or delight our readers, driving from assignment to assignment with one eye out for that elusive wild art that might give the editor another option for front page or plug a hole on page 15.
It’s where I belong. It’s what I love.

Of course, my return to newspapers means another chance to mine my year’s work for some of my favourite photos. In days of yore, I filled an entire edition of the Burnaby and New West NewsLeaders, along with commentary about how a particular photo came to pass, or what I liked about it. I spend more time in the office these days, working the phones, writing stories; the body of work isn’t as deep as I’d like it, but it’s getting there.

Driving back to the office, I saw the light shimmering through fall leaves at Town Centre Park. The key is finding a spot with a dark, distant background so the colourful leaves really pop. And then waiting for some kind of human activity to happen.

If only athletes knew the faces they make.

How could you not want to do a story about a ninja gym? The rest is just using the environment at hand and light. 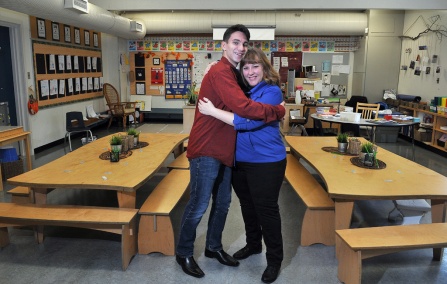 The story of Andrew Teel and his adopted family started with a hug. So of course that’s what I needed to capture in a photo. That we were able to recapture that moment in the very classroom where it first happened made it part of the story as well.

Trampoline is a tough sport to shoot. It’s very vertical and often practised in gyms with terrible lighting and busy backgrounds. So when presented with a need to photograph a tramplinist for a profile story, the last thing I wanted to do was have her jump. But the gym still had terrible light and busy backgrounds. So pop in a couple of flashes, including one underneath the trampoline to give it some visual pop, and we’re good to go.

Political debates aren’t exactly a photographic goldmine. But once they’re over and the candidates can relax, that’s when moments can happen.

Netball you say? All my career I’ve wanted to do a netball story just so I could do this photo, cliché as it may be.

A report of a suspicious package in the parking lot at Coquitlam Station was certainly puzzling, so all I had to do was wait for the cop in the foreground to scratch his head at the right time.

Fog inversions can be fun. Finding a viewpoint that offers a high enough vantage as well as some visual reference in the foreground can mean a lot of driving and pulling the car over to see if a spot works. 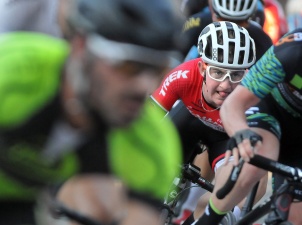 I’d like to say i completely planned this photo from the PoCo Grand Prix, but the truth is it was a lucky frame I had no idea I had until I downloaded the memory card. 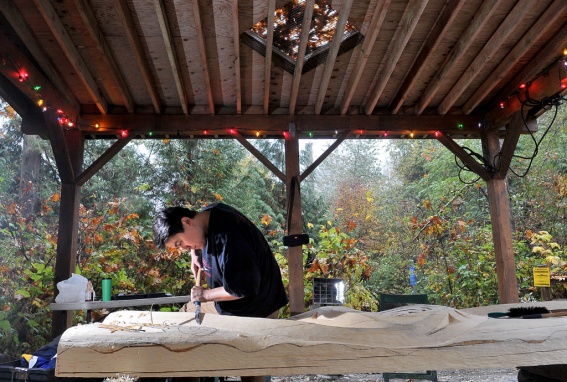 I tend to shoot tight, but sometimes it’s nice to step back and take advantage of lines and light.

The 60 minutes or so of action from any championship sporting event are just a prelude for the shot that really matters. 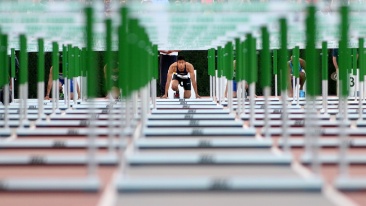 Another chance to get arty at the Jerome Classic.

When I entered Darya Ahmadi’s Port Coquitlam studio to talk about her passion project, I didn’t realize the stylish decor was constructed of disguised exercise balls. I tried to compose the photo to emphasize their unique shape and the monochrome surroundings. 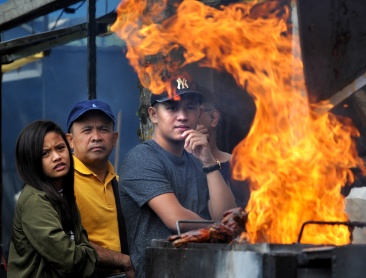 Combining lunch and a photo op is pretty much a journalist’s dream. And seeing as one of the aspects of Port Moody’s Ribfest is waiting in line, my challenge was making that queueing look interesting.

Normally I scan right past photos with unexpected and unexplained random people in the background. But the surprised look on the sideline spectator’s face just adds to this shot of an interception.

Most sports photography is done with long telephoto lenses, but sometimes it’s nice to throw on wide-angle glass and try to create a story-telling image in one frame. This has all the elements of the Jerome Classic, a beautiful summer night, full grandstands, dramatic location and athletic competition.

Track and field meets are a smorgasborg of photographic opportunities. And when those meets are at dusk, there’s a chance to get arty.

Even in a driving deluge, Jenna Buglioni was able to juggle the field hockey ball around her opponents. It took me two days to dry out after shooting this game.

It’s all about the faces.

Oops. You have to be prepared for anything — even things that go wrong as when these senior throwers managed to hurl a hammer high into the protective screen.

Fall light is beautiful. The kid looking back at his competitors is just a happy accident because I orinally lined up this photo to take advantage of the backlight through the trees and spectators along the cross-country course in Mundy Park. 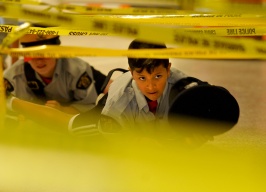 Determination is all in the eyes, and this young junior Mountie was certainly keen on navigating the police tape challenge.

The curved lines of the cruiser bike in the foreground make a perfect frame for the toil going on in the background.

The challenge presented was getting a photo about a new walking soccer league, but walking isn’t the most dynamic activity to photograph; so with Nancy Sinatra’s song “These Boots Are Made For Walking” in my head, I lay on the ground and used the sole’s of my subject’s soccer boots to do the storytelling for me.

A rainstorm and backlight can turn a routine shot of football action into something epic.