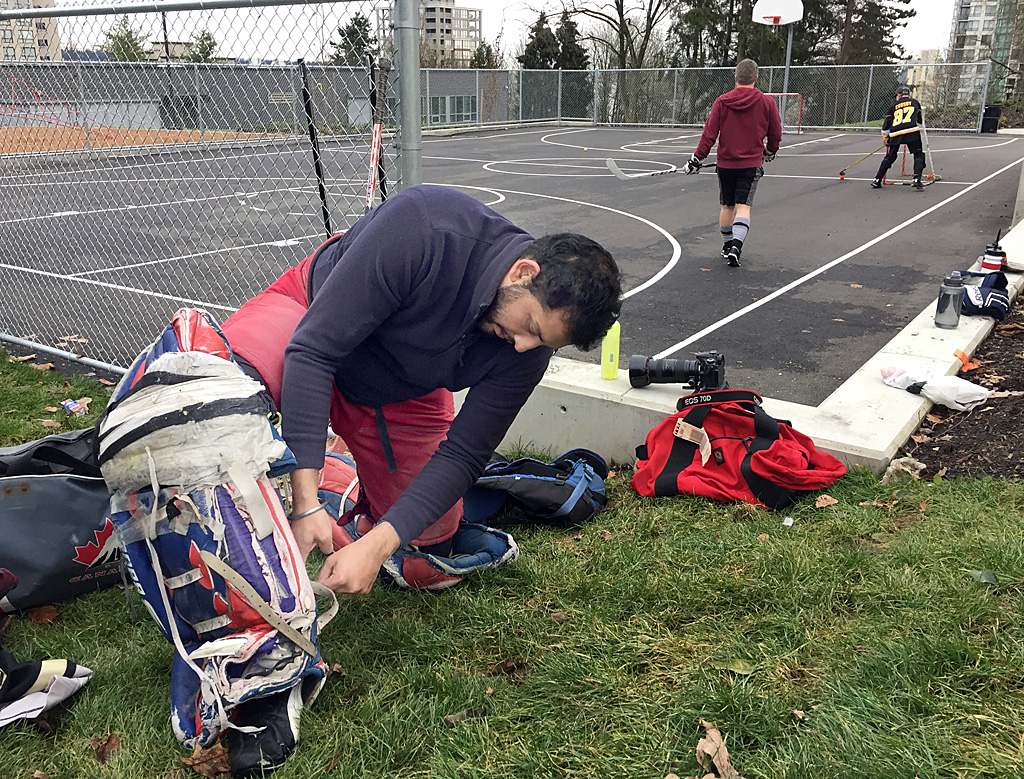 Not even the novelty of a new home court was enough to fire the roadsters up for the second half of the season.

Only five players reported Sunday to the converted basketball court that was one of the few outdoor facilities completely clear of the snow and ice that has kept the road hockey season frozen for the past seven weeks. A week of warmer temperatures and heavy rain diminished the glacial sheet a bit, but the roadsters may be banished from their traditional home court for another week or two until the tundra has melted entirely.

In fact, conditions are so bad at the road hockey courts, they’ve been secured by bright yellow caution tape.

Colonel said the unfamiliarity of the new venue may have tempered the ardour of some of the roadsters to get their game in gear after the extended layoff.

“I think people like what’s normal and comfortable for them,” said the veteran centreman. “I’d say our guys aren’t super good at being outside their comfort zone.”

Nouvelle Guy, who supplied the nets that converted the basketball court to a hockey venue, said he was discouraged by the ambivalence of his fellow roadsters.

“It’s pretty disappointing,” said the versatile veteran. “I expected there would be more people out here, but it is what it is.”

The new facility presented some challenges. While it’s mostly enclosed, the surrounding fence is much lower, allowing more balls to escape play. And the fencing doesn’t quite reach the ground so low rollers had a tendency to slip beyond the game.

But, said the Colonel, it was a more than adequate alternative.

“It’s a nice clear court,” said the feisty forward. “The surface is smooth. It’s a lot of fun running around here today.”

That exercise was a major motivator for Nouvelle Guy.

“It’s been really tough,” said the power forward. “I’ve been wanting to get out on the court. It’s one of the things I love to do.”

The mid-season break that has now stretched to seven weeks for some roadsters is unprecedented. And that could have serious implications as players begin to gear their game for the climactic Stanley Stick championship series in April.

“People are fatter,” said Colonel of the season’s slothful pause. “People don’t quite grasp it’s a lot easier to put a few pounds on than to take a few pounds off.”

“You lose your hands, you lose your ball skills,” said Colonel, who struggled with some of his deke moves during Sunday’s half-court scrimmage. “It’s best for everyone to be out playing the game.”

The previous story was first published on my weekly road hockey blog, roadhockey.net