The following story first appeared in Invest New West, an economic development magazine produced for the City of New Westminster.

MARIO BARTEL/NEWSLEADER Sinuous curves have been a part of bicycle design long before carbon fibre. 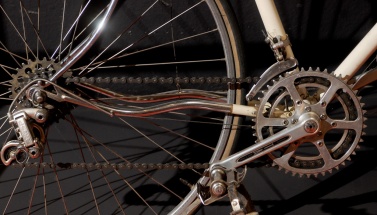 MARIO BARTEL/NEWSLEADER Some vintage bicycle manufacturers like Hetchins, distinguished themselves from their competitors by designing unique components such as curved chainstays.

MARIO BARTEL/NEWSLEADER Much of bike technology is timeless, like this vintage front suspension system that predates pneumatic suspension forks that are popular on contemporary mountain bikes.

The bikes on the floor at Gord Hobbis’ Sapperton shop are made of the latest high-tech materials like carbon fibre and hydroformed aluminum.
But to sell those bikes Hobbis relies on the values and acumen developed by his father, Cap, who first opened his neighbourhood bike shop in 1932.
Having one foot planted firmly in the past while stepping boldly into the future is one aspect of New Westminster’s business community that sets it apart from its neighbours.
The business of heritage is good business, says Eric Pattison, a local architect who’s helped restore a number of the city’s historic commercial buildings and homes.

“You want a place that’s been there for a while, survived the ups and down. Seeing buildings from every decade into the past reinforces that sense of place,” says Pattison.
New Westminster is British Columbia’s oldest city, founded in 1858. For eight years it was even the provincial capital. Until the first decade of the 20th century, it was also the province’s largest city.
“We’ve always been an important city, right from the start,” says Julie Schueck, New Westminster’s heritage planner. “We didn’t grow up as an add-on to another city. We are a city, we have a downtown. Our past is important to us.”
That historic commercial core distinguishes the city, says Pattison.
“Residential heritage is all well and good, and creates a lifestyle. But it’s more of a challenge to have your community branded as heritage without a historic downtown.”
A historic downtown is made up of more than just old buildings, says Pattison. It’s character is also determined by the width of streets, the lanes and alleys that connect those streets, the pocket squares that allow people to gather and create a neighbourhood vibe.
The walkable nature of historic commercial districts and the varied services that reside there is becoming increasingly attractive to enterprising businesses that are turning their backs on generic suburban industrial parks. They’re seeking to offer employees more than just a cubicle experience.
“Our strongest takeaway from our work in historic districts is the strength of the area will come from the passion and commitment of the business owners we work with,” says Robert Fung, president of The Salient Group that recently completed redevelopment of the historic Trapp + Holbrook blocks on Columbia Street into modern condos with commercial spaces at street level.

Still, preserving heritage takes constant care and attention.
“You have to overcome the impression that the infrastructure is dated as well,” says Schueck. “Old buildings can be rehabilitated and have all the new services and modern technology put into them.”
“It’s an education,” says Pattison. “You have to be willing to take risks, and some of those risks might involve saving the building and repurposing it.”
“You have to get people to see that heritage is not a hindrance,” says Schueck.
That was the case with the Trapp + Holbrook project, says Fung.
After languishing as an empty shell for years as various redevelopment proposals by a series of owners came and went, Salient Group painstakingly preserved the block’s historic facade while constructing a sleek, modern condo tower behind it. It’s a model the company successfully implemented in Vancouver’s historic Gastown district that sparked its resurgence from a tacky tourist backwater to a lively urban neighbourhood of stylish boutiques, trendy restaurants and bistros and upscale condos.

Fung says a similar revitalization is underway in New West.
“We believe that Trapp + Holbrook is a model for the evolution of Downtown New Westminster.”
Pattison says as more owners realize the potential of preserving heritage, it gains momentum.
“You can’t take heritage for granted. You have to work as hard or harder than other communities that don’t have the heritage resources we have.”
The payoff goes far beyond just having a nice collection of old commercial buildings, says Hobbis.
“A key part to a business being successful is consistency. Having that keeps you on pace, you don’t chase the trends.”
Schueck says the city’s current initiatives to reclaim its historic waterfront which include the construction of Pier Park, the partial demolition of the Front Street parkade, a relic from the car-centric 1950s, and the reconfiguring of the newly opened streetscape into a pedestrian-friendly mews will further enhance New Westminster as a commercial centre with more to offer than just glass and steel.

“Our access to the river is one of the reasons the city was put here in the first place,” says Schueck. “There’s a real interest in getting back to that connection.”
Giving businesses, their employees and their customers an opportunity to connect with their roots can forge a strong bond.
“In this age of relentless digital communication, it’s almost too scattered a lifestyle for many people, so they’re grasping for authenticity,” says Pattison. “Everything has to resonate with legitimacy and character, and heritage has that in spades.”
Hobbis couldn’t agree more. Above the lithe carbon fibre road bikes and huge shock-absorbing downhill mountain bikes on the sales floor of his bike shop hangs his father’s collection of more than three dozen vintage bikes from as far back as 1869.
“If we expose our heritage to people, show them where we’ve come from, what we’re doing, it becomes a real strength,” says Hobbis. “It gives us a deep well of knowledge to feed new ideas.”