The following piece was originally published on The Big Ring

The most well-attended FRF ride thus far rolled out from River Market powered by 13 pairs of legs. Over the course of the planned 85 km route, we were joined by four more, bringing our peloton to 17. But it’s the 18th rider who wasn’t there that brought us all together for a special Saturday outing.

It’s the one-year anniversary of the passing of John Lee, our peloton’s missing man.
John was a devoted family man who made it one of his life’s missions to instil his love for cycling into his daughter.

He brought her along to local races to share with her the excitement of the pack rounding a corner at speed, pedals and spokes whirring, the breeze generated by its passing blowing hair and hats askew.

During our group rides John told us of his cycling adventures with his daughter. Often, if our planned route was a long one, he’d veer off and head for home for an afternoon ride with her.

When word spread through our peloton last year of his sudden passing, we were all in disbelief; John seemed fit, a strong rider whose calves tirelessly pumped like pistons up hills, through the countryside, along the urban bike routes.

Sometimes the clock of life operates on its own schedule.

John made our group stronger in its formative seasons; he was ready to ride in all weather. He wasn’t caught up in cycling’s fickle fashion foibles; he loved his classic steel bicycle and eschewed modern clipless pedals for old-timey toe clips and leather straps wrapped snugly around his vintage lace-up shoes.

But he’d be proud of the group’s growing dynamic and the new kit that turned heads as we rode into the turf of other established groups like Glottman-Simpson on their traditional riding day. It was as if the FRF was announcing its official arrival on the local road riding scene.

It’s fitting then, that our John Lee Memorial Ride was also a bit of a coming out celebration for the Fraser River Fuggitivi.

Saturday’s ride was also a bit of a coming out for the FRF, as we rolled into the turf of other groups that traditionally do their big group rides on Saturdays 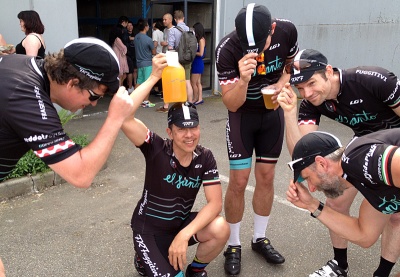 The FRF peloton will also be losing its cap man, Richard, as he heads east to open an Ottawa branch. 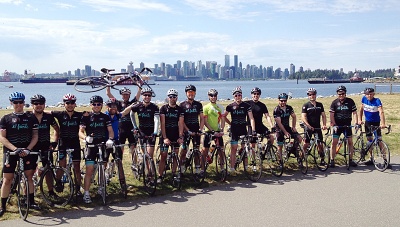 By midway through Saturday’s ride, the number of cyclists had swelled to 17.

The Fraser River Fuggitivi prepares to roll for a rare Saturday ride to honour its missing man, John Lee.

Raising a toast at Dageraad Brewery to the FRF’s missing man.

An impressive group of bikes at Dageraad Brewery.