Doo capped a season he’d rather forget with a memorable performance to lead his team to a 20-13 victory Sunday and a two-game sweep of the Stanley Stick championship series.

The speedy centreman scored a handful of goals, many of them spectacular individual efforts of footwork and persistence, to earn the Conn Stick award as the series most valuable player. He was the unanimous choice by the underdogs who were repeatedly victimized by Doo’s slippery moves and stickwork just as they seemed poised to get back into the series.

It was a stunning return to form for the lanky scorer who struggled to find the net at times during the regular season as he dealt with injury and personal issues.

After romping to a relatively easy 20-6 win in last week’s series’ opener, Doo and his mates knew they’d be in for a tougher battle from their opponents in Sunday’s decider, as they were bolstered by the addition of two players, Ohio and Nouvelle Guy.

“There were definitely times we were under siege,” said Doo. “But I think we were pretty consistent all game.”

In fact the game seemed poised to get away from them entirely after the underdogs got to within one, 6-5; but a three-goal outburst reestablished their advantage and seemed to clip the underdogs’ growing confidence.

“That was a key point where we elevated our game,” said Doo. “Once you pull away like that you’ve got to keep your foot on the pedal.”

Joker said the trio of successive goals reversed the game’s tide back into their favour.

“We were losing momentum at that point and that was the catalyst we needed to hold the lead for the rest of the game.”

“That was kind of a backbreaker,” said Wink. “It gave us momentum and a cushion so we could give up a goal and not be too worried.”

The winners never trailed in the series, but that doesn’t mean their victory was easy. It took the solid execution of a defensive game plan to stifle the dangerous tandem of Cleveland and Ohio.

“Everybody knew the job they had to do; shut down their big shooters,” said Joker.

“I thought we had a really solid game plan and we stuck to it,” said Doo.

“There was a lot more battle,” said Wink, whose side added Holt and Coach to its lineup.
That gave them two full lines of players. And a challenge to establish chemistry quickly.

“The camaraderie we built on this team over two games was second to none,” said Joker.

“I think we found some chemistry and that will take you a long way,” said Doo, who settled into an effective combination with wily veterans Lak Attack and Wink after some initial line rolling.

“You don’t panic, you know you’re going to be able to complete passes,” he said of working with his senior wingers. “It really was a team win.”

Coach heads up court away from the pursuit of Bam Bam.

Nouvelle Guy gets a shot away. 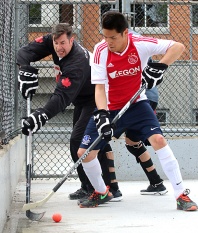 Colonel and Bam Bam battle in the corner late in the game. 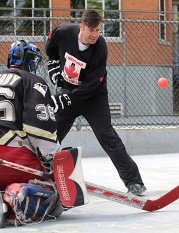 Colonel is thwarted on a scoring opportunity by Twizzler. 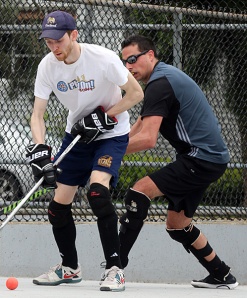 Doo eludes the check of Ohio. The speedy centreman was voted the series’ most valuable player.

Colonel is confident his team will prevail. They never trailed in the championship series.

Cleveland tries to recover as his team attempts to extend the Stanley Stick finale to a decisive mini-game. 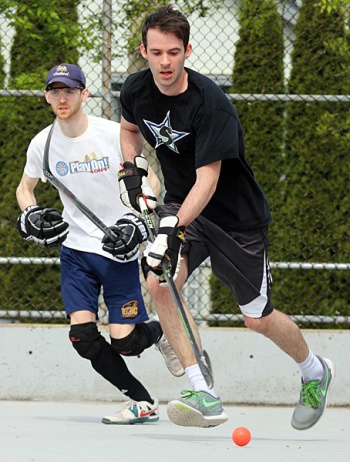 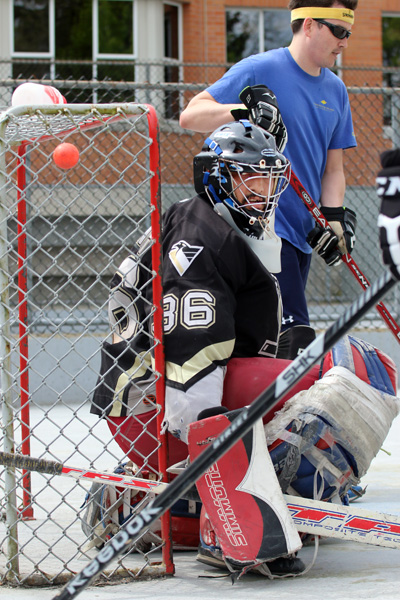 Twizzler eyes the evil orange plastic ball after it jammed in the outside of his net.

Cleveland’s speed and shifty footwork wasn’t enough to get his team back into the series.